An intellectual says a simple thing in a hard way. An artist says a hard thing in a simple way. –Charles Bukowski

Now that you have completed the blind contour drawing exercise, hopefully you’ve opened up the communication between your eyes and your hands without that judgmental brain getting in the way!

Speaking of judgmental, let’s have a quick chat. STOP WORRYING about whether or not your work is good. This is supposed to be fun and educational—a beginner’s school. Remember what Ralph Waldo Emerson said, “Every artist was first an amateur.” So Matisse and Rembrandt started out exactly how you are starting out. They became masters after years and years of practice. They too have created countless pieces of art that have either been discarded or kept to remind themselves of how far they have come.

In the mid 19th century, the exclusive Paris Salon put up only the “best” work of the day. Many artists who were trying new things were rejected from the salon, so they made their own gallery show in 1863 called the Salon des Refusés (“Exhibition of Rejects”). You know who was in that show of “rejects”?

…and many other artists. The point is, don’t judge yourself too harshly. Don’t worry about anyone else liking it. Make yourself happy—that is the most important part.

Okay, I’m getting off my soapbox now.

Exercise 1: Make Your own Value Scale

Exercise 4: Draw A Pet Or Other Animal

When you’re drawing with pencil, everything is black and white, so how do you tell the difference between a lemon and an apple? Value. Value is how light or dark something is. If you move on to the painting courses after this, we will talk about value again with color in mind, but to begin with, it’s easiest to think about value in black and white terms. 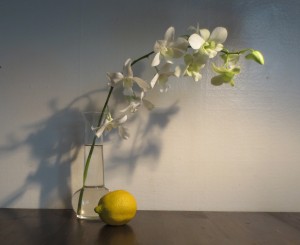 Here I have set up a still life. When we look at it in color, it’s difficult to tell right away what the different values are. It helps if you squint your eyes really tight. 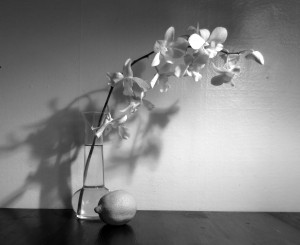 When I convert the photo to black and white, we can see a whole range of values. The highlight on the orchid is the lightest value (white) and the shadows under the lemon are the darkest values. 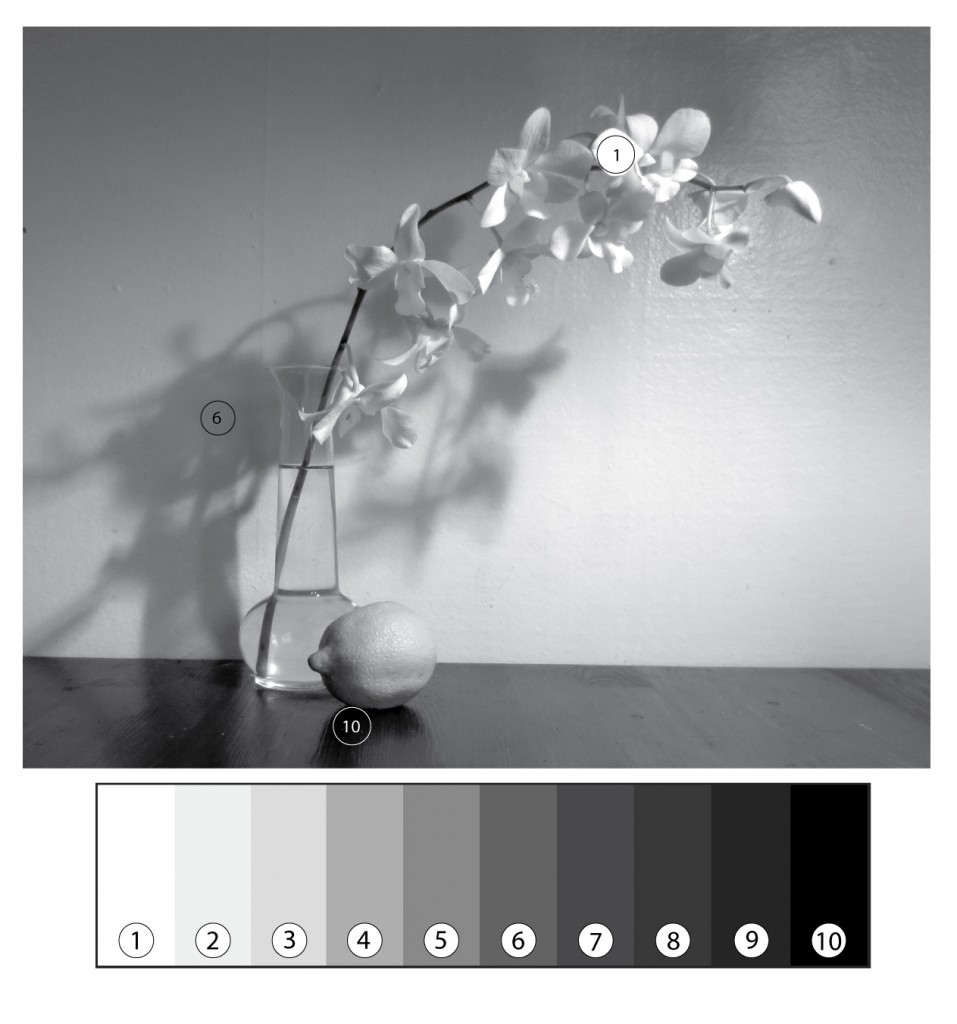 It may be helpful for you to make a value scale you can hold up to objects to determine their proper value.

Exercise One: Make Your Own Value Scale

Get out your pencils and make your own value scale card. Make a row of 10 squares on a piece of paper and, using your softest pencil, fill in square 10 on one end of the scale using a back and forth motion with your pencil and make it as dark as you can. Leave the square at the other end of the row white and fill in the squares in between to look like the photo above. You may need to use different pencils for this. If you have a wide range of pencils, then going from darkest to lightest use your 5B, 4B, 3B, 2B, HB, 2H, 3H, 4H, and 5H pencils. Remember when you’re making a drawing not to press too hard to make something dark—you can leave impressions on your paper that are impossible to remove later. You’re better off using a softer lead (e.g. 6B) and using moderate pressure to get the dark you want.

If you only have an HB (tip: it’s also a standard number two pencil you use at school) you can use cross-hatching to achieve different values. Cross-hatching is a technique in which you make intersecting straight lines in order to create lighter or darker values. The lines can go in any direction you feel comfortable making them, so long as they cross over each other to create a sort of mesh-like appearance. The more lines you add, the darker the value becomes.

Example of cross-hatching to create value.

Stippling is another method used to create value, but it uses dots instead of lines.

Example of stippling to create value.

When you’re drawing something that is far away, it is often lighter in value than the other objects in the scene. One way I remember this is to think about mountain ranges. We can tell the distance between the mountains based on their level of value contrast: 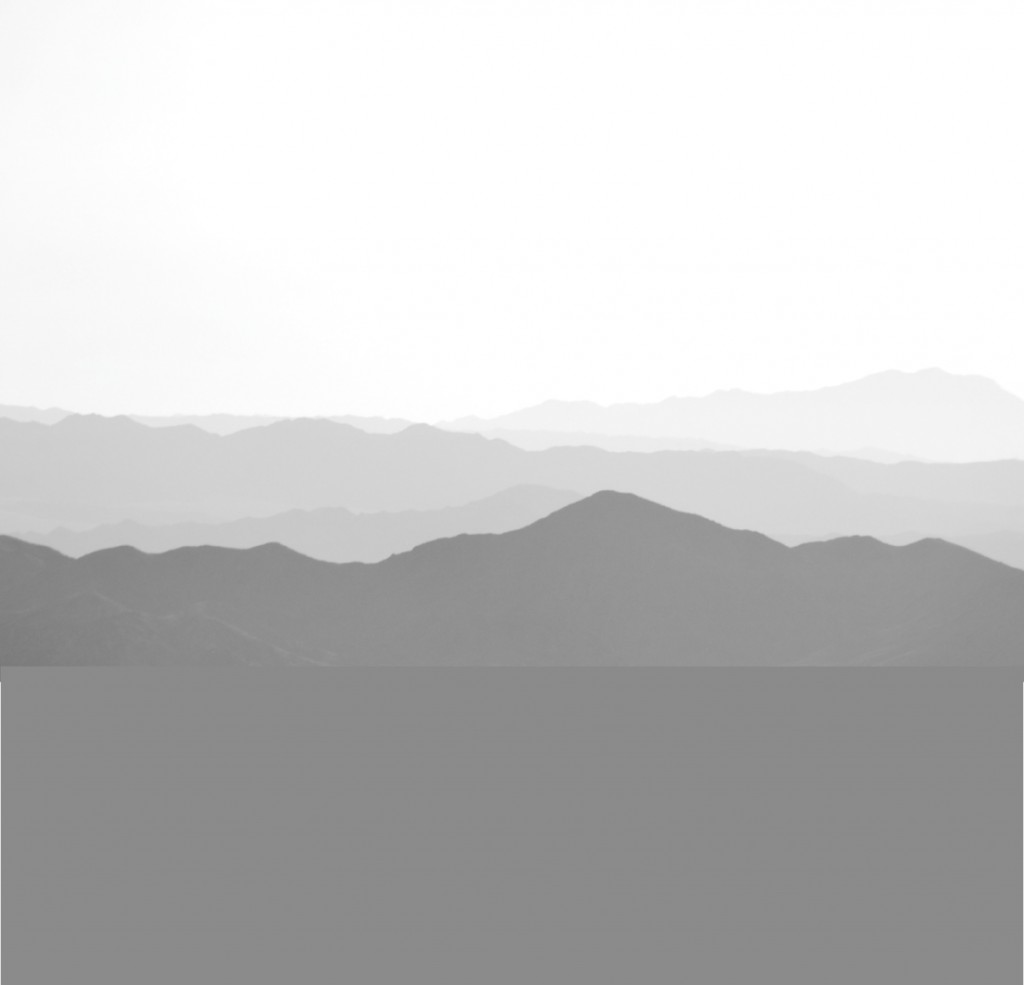 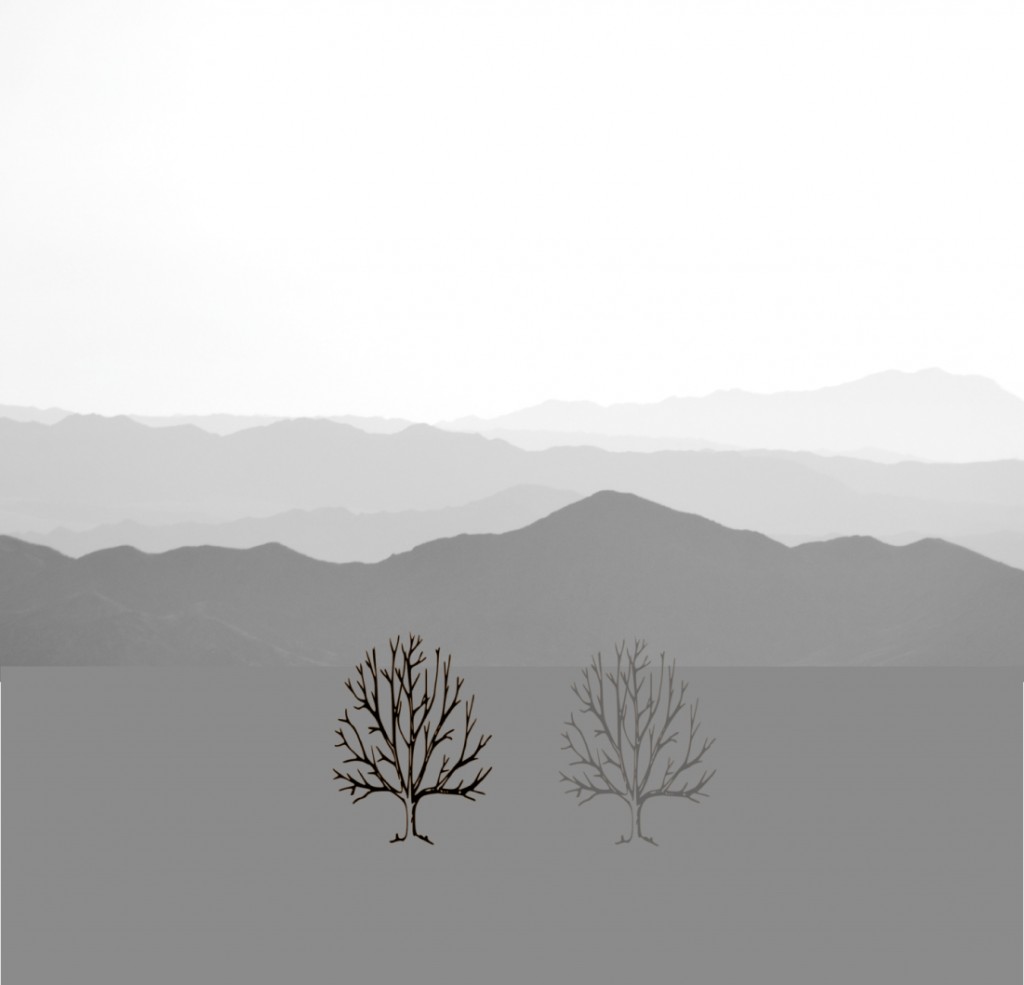 Which tree appears closer to you?

Even though they’re both the same size and on the same plane, the dark tree appears to be closer to the viewer than the lighter tree. This is because sharp value contrasts push forward while close value contrasts recede.  The lighter tree is closer in value to the mountains, making it appear farther away, while the dark tree is in sharp contrast to the grey mountains, making it appear to come forward.

If we change the scale of the lighter tree and move it up while moving the darker tree down on the page, you can see how this creates a sense of three-dimensional space. 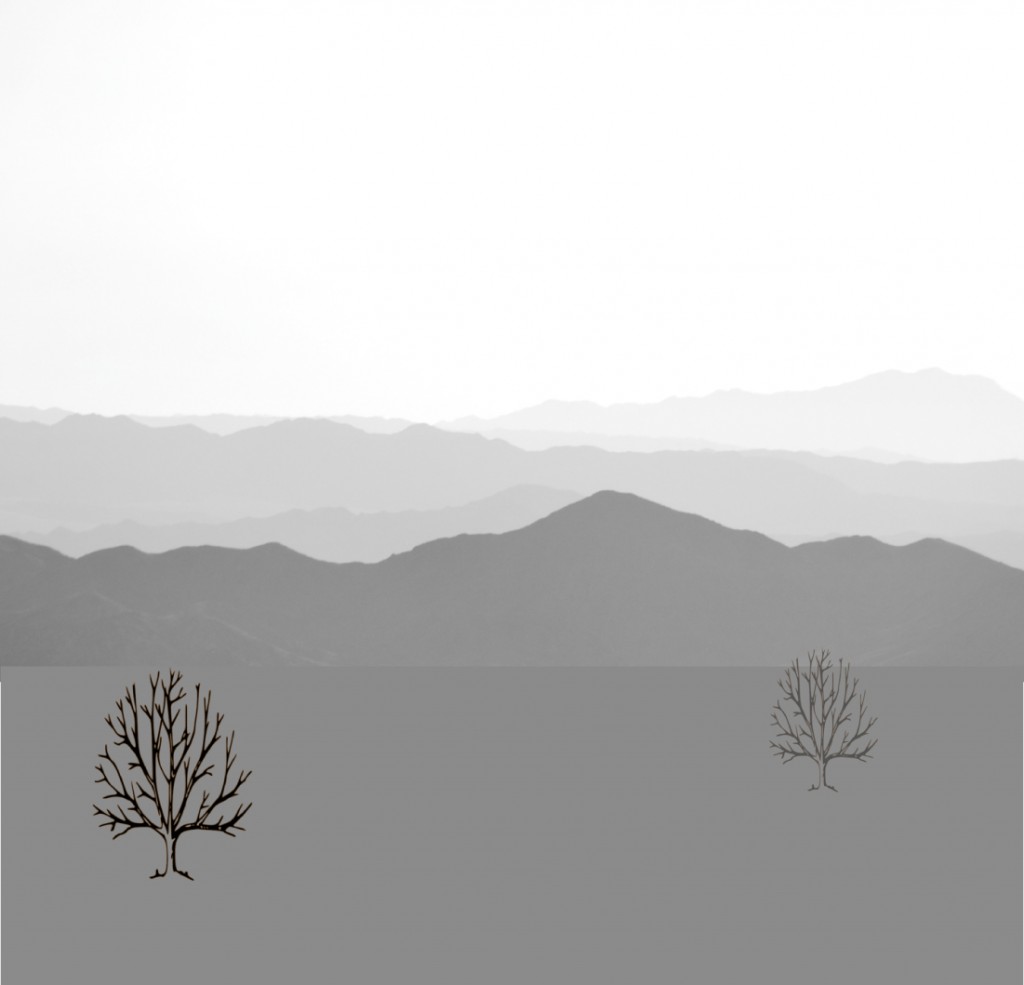 You could have a light background made up of many different values that are 2s, 3s, and 4s on the value scale, then in the foreground have a 10 against a 2 object, making the foreground move forward.  Let’s add a house with a light side behind our dark tree to see how it helps the foreground move even closer to the viewer: 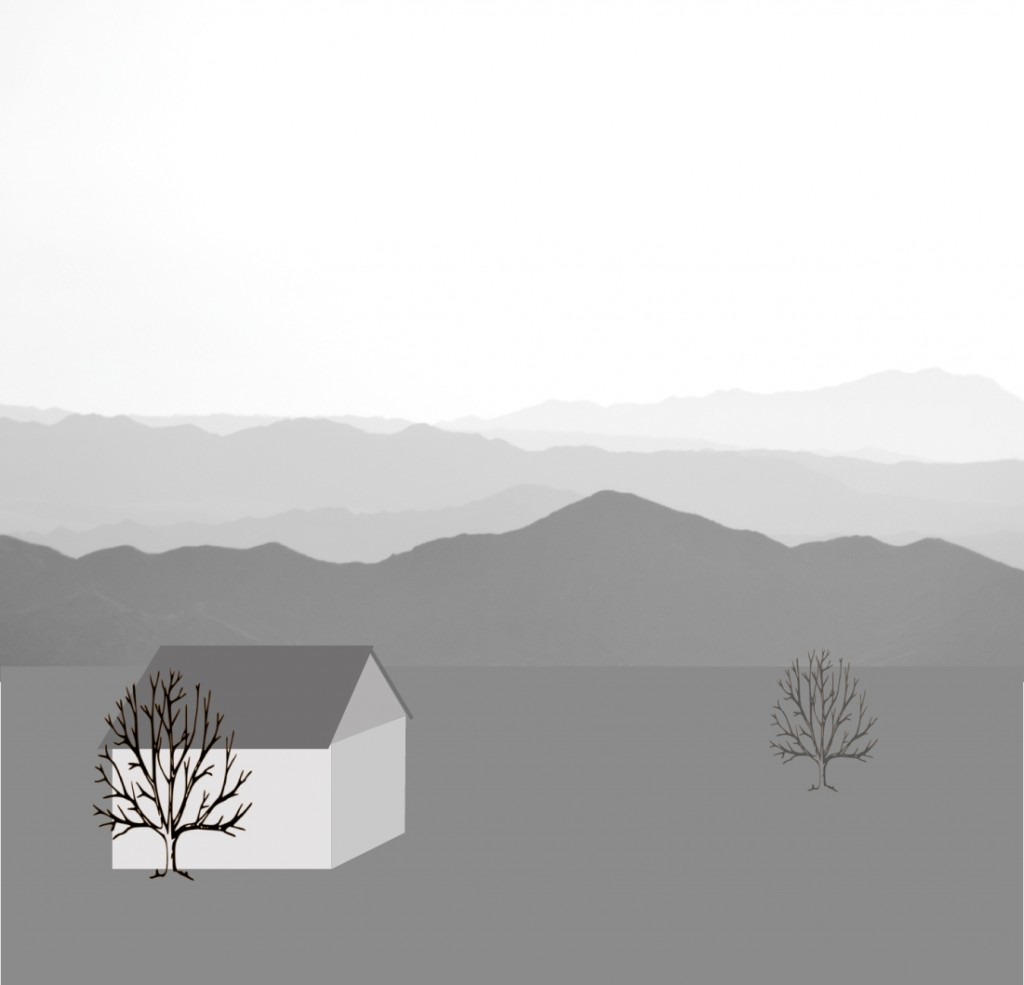 See how that contrast helps bring the foreground forward?

Remember this when you set up your composition. Sharp contrast comes forward, close contrast recedes. Look for this in your everyday life! Now that you’re aware of it, you will start to see it everywhere.

Let’s do a simple drawing using three values. Find a simple object in your home (a piece of fruit for example), use your HB, 2B, and 6B pencils to make a quick value study. This doesn’t need to be complicated—we’re just looking at values, no details yet!

Here’s my value study of the orchid and lemon photo I took earlier: 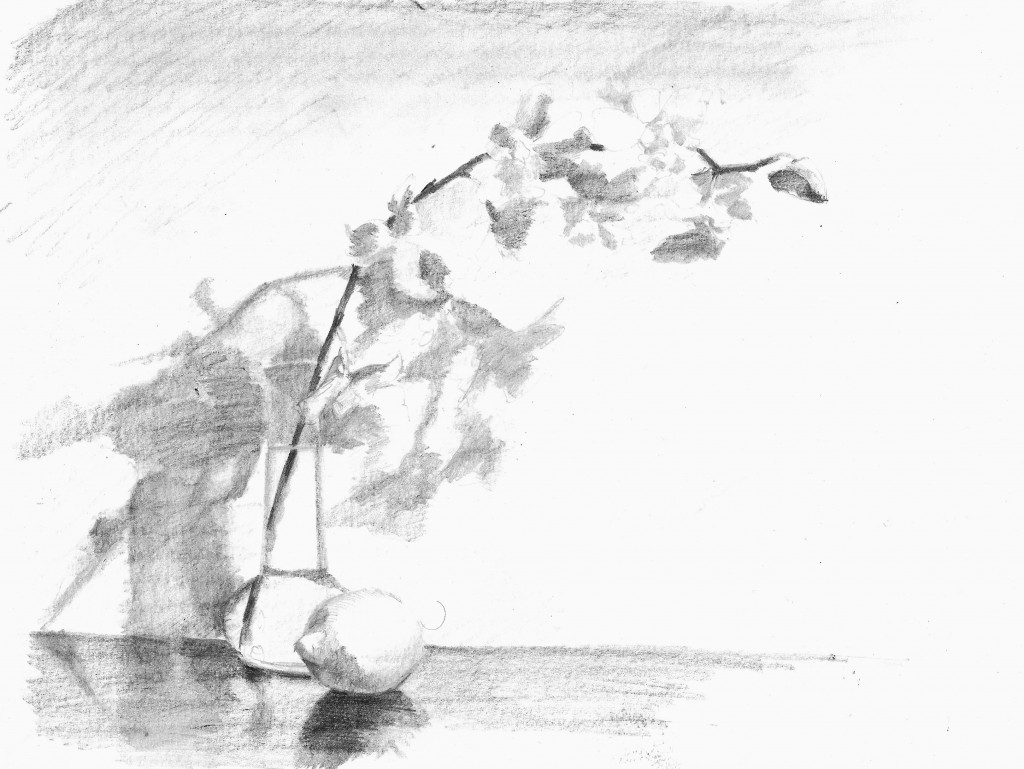 When you’ve finished your drawing, send a photo to us! Use our submission form here.

A gesture drawing is a really quick drawing that gets the basic information about the object down on paper. The goal is not to record the geometric form of the object but rather the movement in it. I know, you’re thinking, “it’s a still life—what movement?” But when your eyes are moving all over the object trying to capture its essence in just a few seconds, you’ll find some beautiful lines and arcs that you didn’t know were there before.

One of the things to think about while you’re doing this is to “draw from your shoulder”. By keeping your arm loose and drawing using your whole arm instead of just your fingers, you’ll achieve much nicer and more accurate lines. Many beginners feel the need to be over-controlling of their movements. While it seems that letting go of some of that control will result in sloppy or bad drawings, the opposite is in fact true. Don’t hold your pencil like you’re writing a letter–you’ll never finish in 30 seconds that way!

Get out a piece of paper from your large newsprint pad and your vine charcoal or pencil. Set up a still life and put a timer on (your phone, an egg timer, your computer). Set the timer for 30 seconds. As soon as you start the timer, start drawing the object or objects in a really fast, loose way (using the overhand grip will help with this). Just try to capture the basic form of the object, as Sarah did in her gesture drawing, while still trusting your eyes, not your brain. Draw not only around but through the form. Try to feel your way around its shape. Every object has an inside too so don’t just draw the outline. 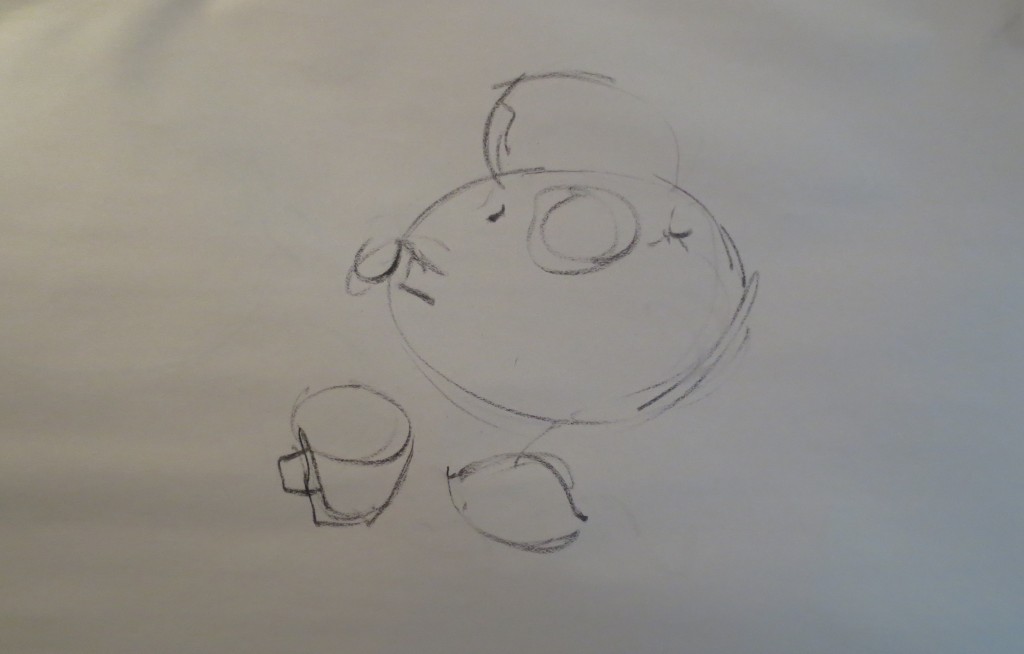 Get as far away from your sketchbook as you can—no noses touching the paper! Use your whole arm to draw, not just your fingers and your wrist. If you’re doing it right, you’ll look like you’re in a fencing match!

After the 30 seconds is up, change the still life up a bit and do it again.

Vine charcoal is easily removed from the page with a chamois cloth, so if you’re using that, you can keep using the same page over and over again. It will leave some residual marks on your page, but that’s okay. If you’re using a pencil, flip the page over and use the backside to conserve on paper. Or just keep drawing on top of your old gestures! This is an exercise in seeing, not making perfect drawings.

Exercise Four: Draw A Pet Or Other Animal

If you have a pet, practice your gesture drawing on them. Honestly, they’re the best for practicing your gesture drawing because even if they are sleeping, chances are they’ll move at some point and you’ll have to start over on a new sketch. If they’re actively moving, see if you can catch some of their movements in a fast gesture drawing.

If you don’t have a pet, try going to the zoo and drawing the animals there. You can also go to a public park where you may see squirrels and birds, or ask a friend to pose for you. Anything that moves a lot is good to practice your gesture drawing on. 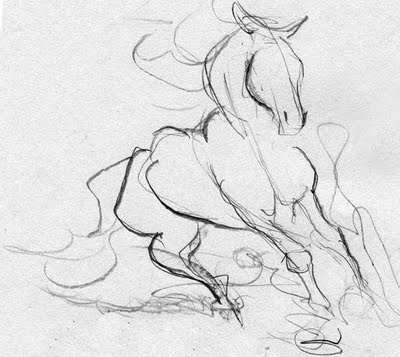 Combine both value and gesture. Set your timer for some time between thirty seconds and two minutes and create a gesture drawing of an object and capture some of the values. Block in the darkest bits of shadow and leave the highlights white. You can draw different items in your house or go to Quickposes.com* if you want to draw a human figure. On that website, you can choose the length of time you want the image to stay on screen for and whether you want nude, clothed, male or female figures. It’s a fun tool if you’re feeling brave!

*The Website is not directed at anyone who we know to be under the age of 13. 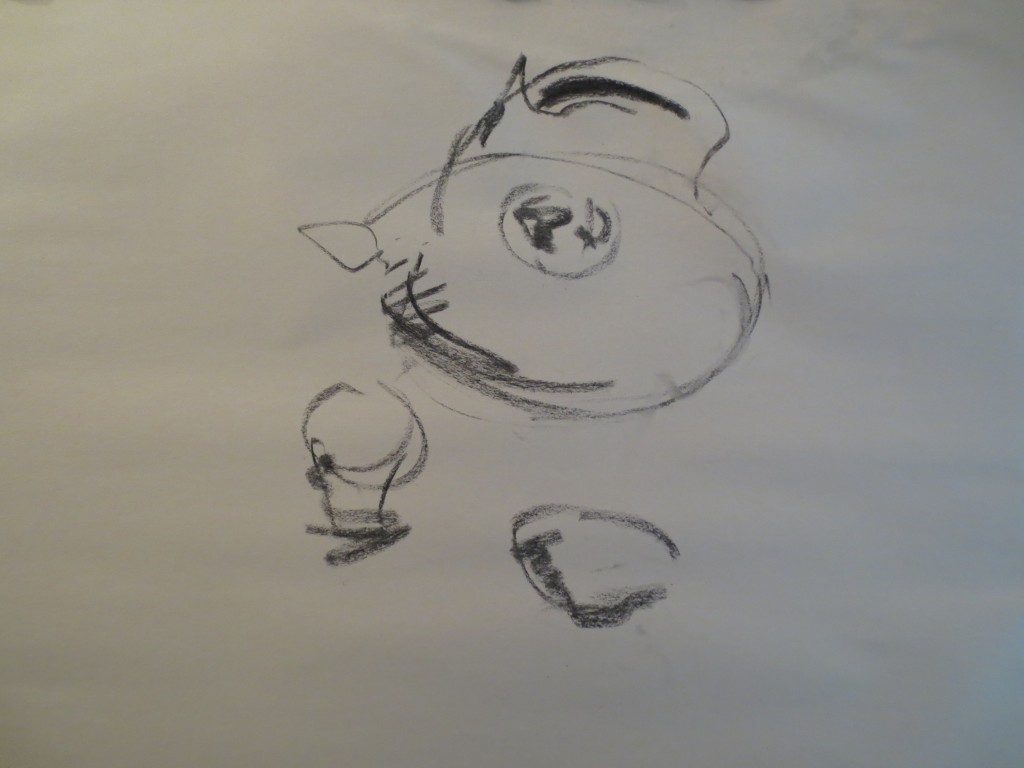 As always, send us your completed exercises! Use our submission form here.

Key Lesson Learnings: You have learned the importance of value in creating space and thus perspective in your drawings. A gesture drawing is a useful technique for getting you going and capturing objects.

Next lesson: Thinking In Space