When I see a white piece of paper, I feel I’ve got to draw. And drawing, for me, is the beginning of everything. –Ellsworth Kelly

If you’ve been drawing as many boxes as I’ve been asking you to draw, you’re probably a little fed up and wondering, “Why do I have to draw all these dang squares? I’m not interested in drawing buildings!”

Trust me, I know. I’ve said the exact same thing. The reason why we practice making squares/cubes, circles/sphere, and triangles/cones over and over again is because these are the building blocks for all other objects.

For example, can you find a cylinder in this image of a lion? 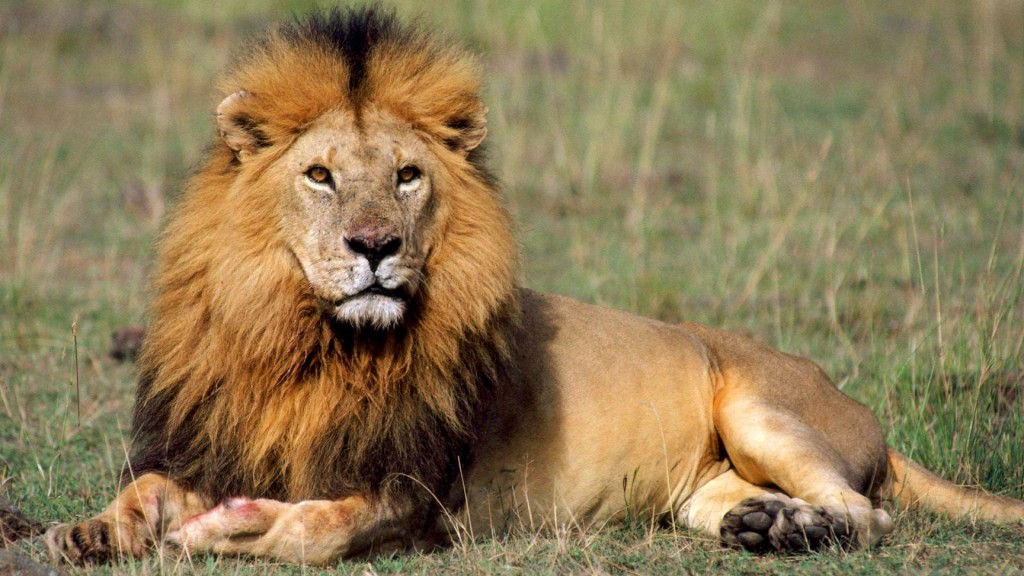 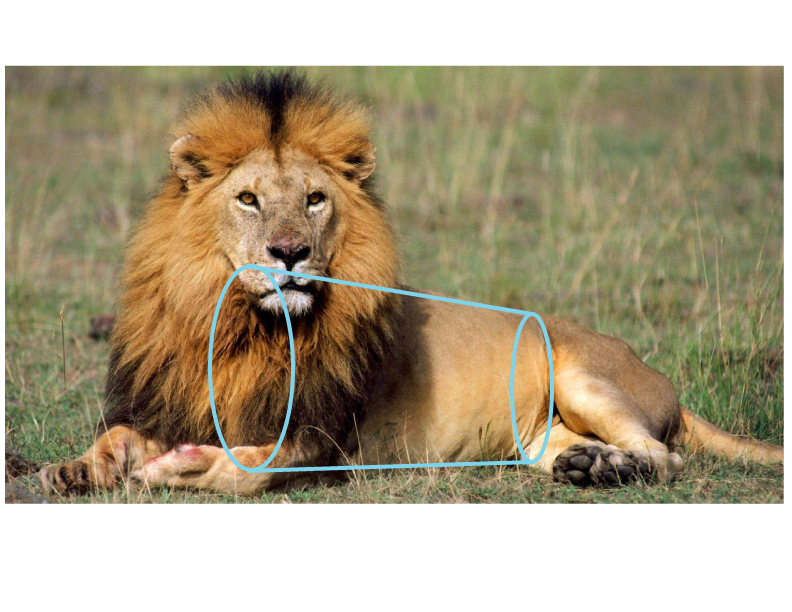 Once you start breaking down your subject into the basic shapes we’ve been drawing (sphere, cylinder, cube, cone) then it becomes much easier to understand the form and to make it look three-dimensional. For this example, don’t worry about the vanishing points. Our lion is pretty close to us, so I’d rather you look at the angles, proportional relationships, and forms within the body. 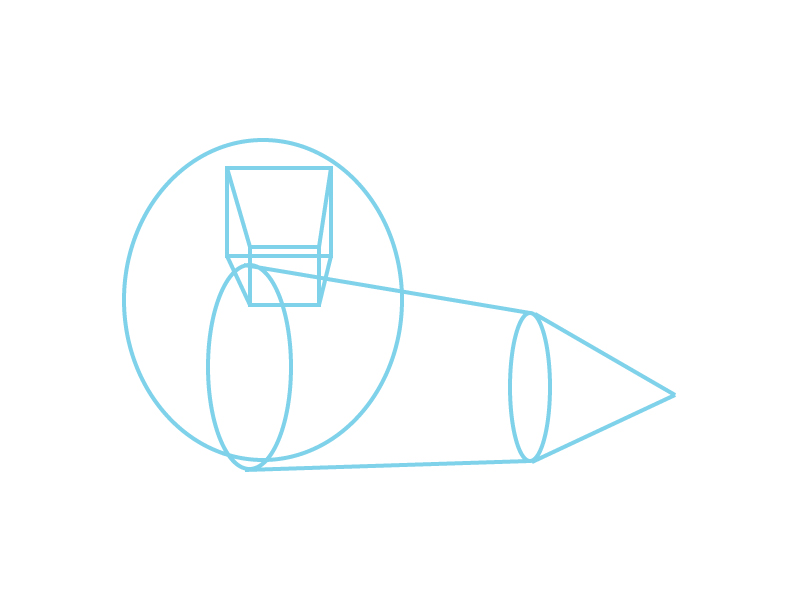 Can you see how we can use this framework now to start drawing the lion? 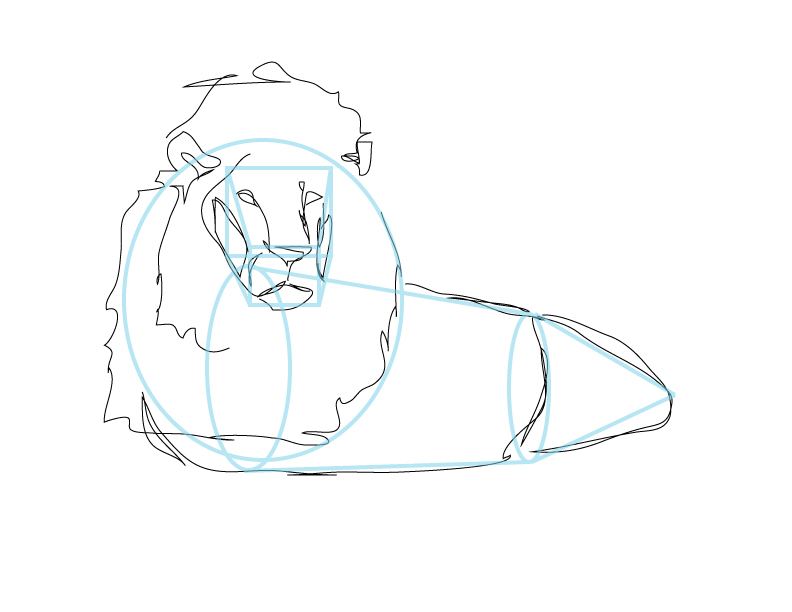 Using the forms as a framework for our figure makes it easier when we start the actual drawing. Recognizing the forms within our subject matter helps us to fill in the rest of the information. This is exactly why it’s important to draw a lot of boxes and spheres and cones. When you’re good at looking at the form by itself, you’ll be able to spot it better elsewhere.

I’m going to show you how to use these forms to help you in building your own still life. Grab some objects from around your house or studio, your paper and pencil, and follow along!

Here I have set up a really silly still life using one light source with objects you probably have around your house—a shampoo bottle, a tissue box, a nectarine, and a glass soda bottle. Keep in mind that your vanishing points are now off your paper, so you’ll need to use your pencil and a straight arm to determine angles and measure proportions. Part of the reason why I had you draw so many cubes, cylinders, and cones is so that you would start to get a feel for those forms. Now, when you’re drawing without your vanishing points on the paper, you know how the forms are structured so you can make them without your guide lines.

Now I will draw the forms that make up each of these objects on top to show you how to do it (I’m using my computer for the sake of this lesson, but you should do this free hand): 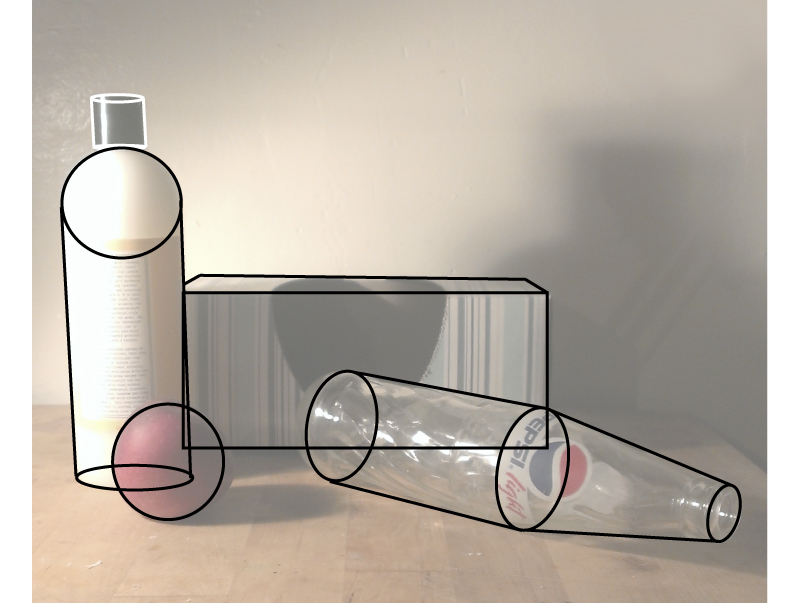 I just drew the forms without thinking about how they overlap, so now I’ll erase the lines I drew that we can’t see because they’re being covered by another object. 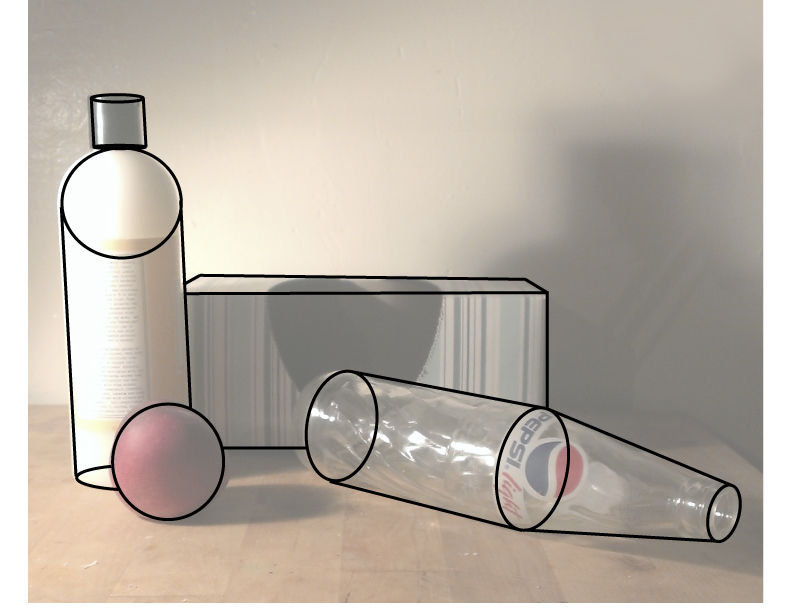 Without the photo behind, this is what it looks like: 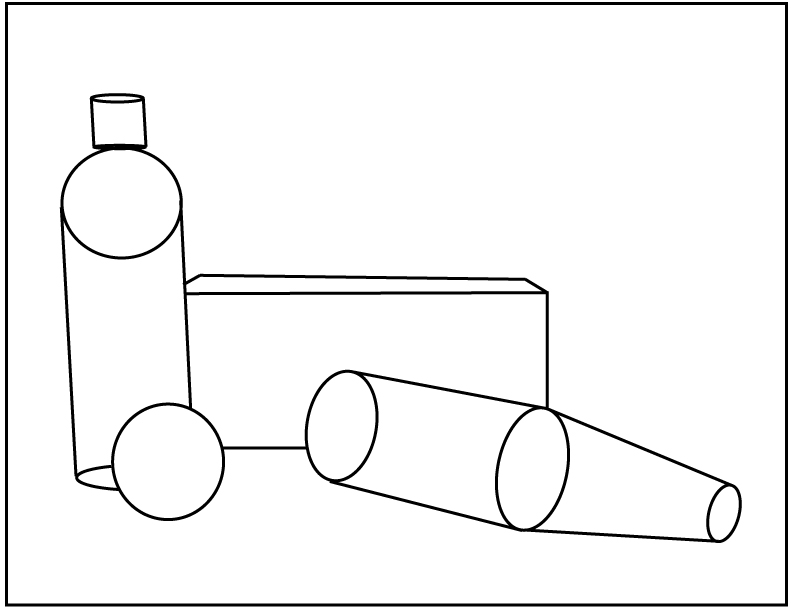 Now the fun begins! I would at this point start finessing my forms until they more closely match the objects. For example, the nectarine is not a perfect circle—I would use the circle as a guide and change it until it matches the shape of the nectarine better.

Exercise One: Draw A Still Life

Using just your pencils, an eraser, and your paper, draw a still life. Set up a still life for yourself with some objects from around your house or studio. Use some items with complicated shapes that will be made up of two or more forms each (i.e. a coffee pot, a chair, a doll, even your hand will work…). Find the form within each object and draw it, like you see above. All the forms can be elongated or tweaked to suit your needs, so a sphere may become an ellipse or a cube may become a rectangle. Don’t forget to add value!

When you’ve finished your drawing, send it to us using our submission form.

In the early 20th century, a lot of artists reversed this process. Instead of finding the geometric forms within an object and building on top of them, the artists started reducing the objects to their basic geometric shapes. This movement was called Cubism. They also started looking at the same object from different angles and painting each angle at the same time. That’s when we got works like this: 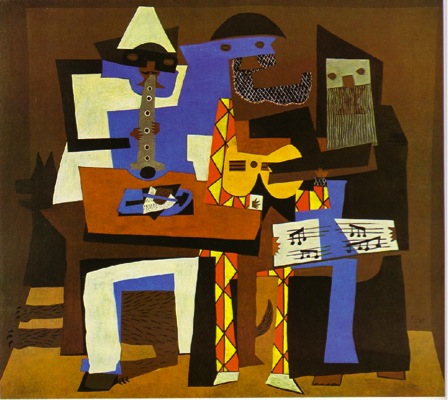 Notice how Picasso has broken down the human forms into very boxy, elementary shapes (not forms!). 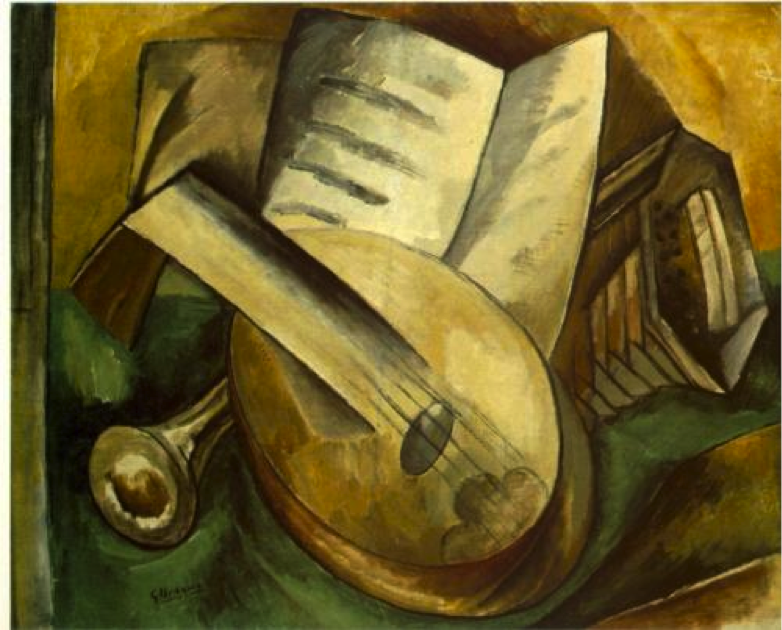 Braque is utilizing some rounded forms, but still very simple in nature. This is a good example for how your still life set up may look. 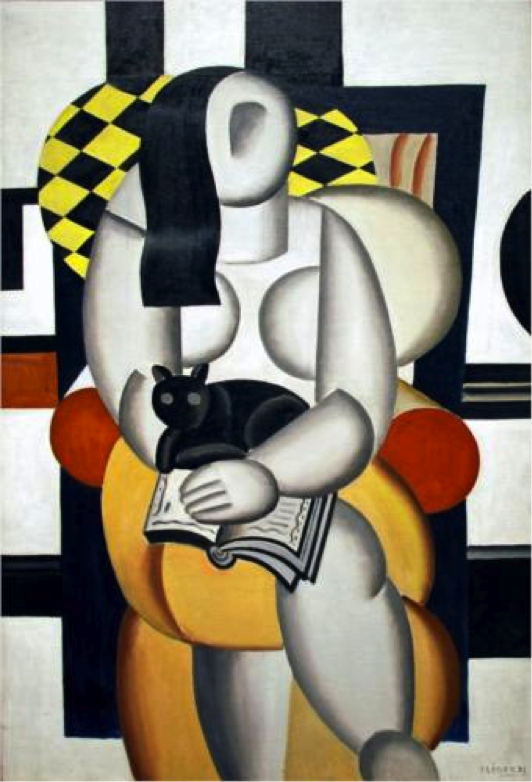 Leger is using a lot of rounded forms and curving lines. This doesn’t mean it’s not cubist…it doesn’t have to be made out of cubes to be cubist! He is still breaking down the figure into simplified forms. 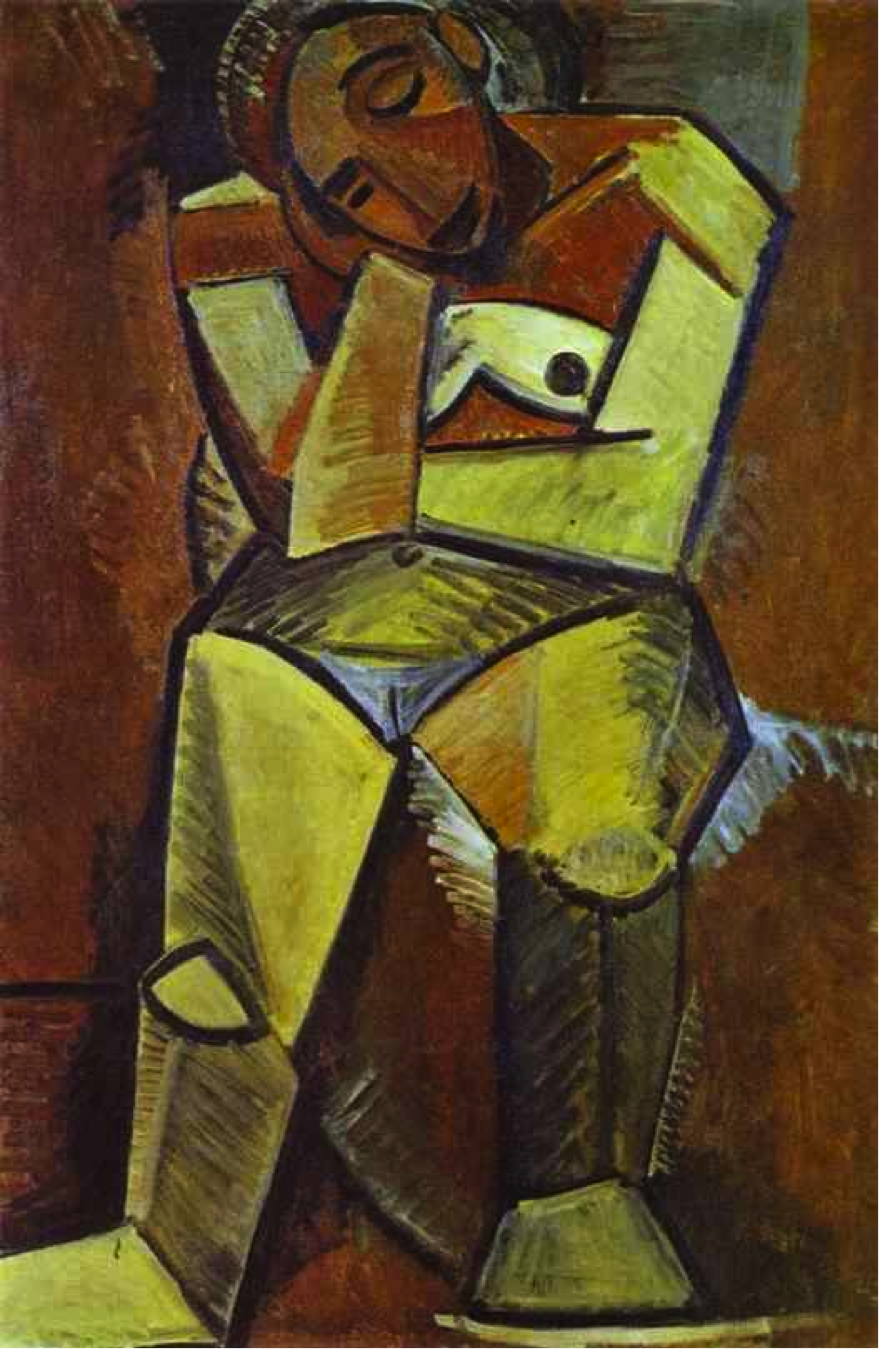 Picasso’s seated figure is very different from Leger’s. Whereas Leger’s figure is rounded and soft, Picasso’s figure is more angular and almost boxy. Both fall into cubism—they’re just different ways of going about it. Keep this in mind when you start exercise two below.

Also, you’ll notice this Picasso is very different from the other Picasso we looked at. He was a very versatile and prolific artist because he tried so many new things…something we should all try to do more!

Set up another still life—with different objects—and make it into a cubist work of art. You don’t need any tools other than your pencils, eraser, and paper. Walk around the objects. View them from different angles. Draw a very simple, cubist version of your still life. Then get up and move with your paper ¼ of the way around the object and draw it again on the same piece of paper. Attach the new view of the objects to the old view. Try zooming in on a section and out on the other. What kind of effect does this produce? This is your chance to do a little Picasso-style experimenting!

We want to see what you came up with! Submit your cubism-inspired drawings to us: submission form. As always, if you want to share any tips or discoveries you had, send them to us along with your photo!

Key Lesson Learnings: You have learned how to recognize forms (circles, cylinders, cones, etc.) in everyday objects, and use those forms as a basis for drawing the objects.

Next lesson: Composition For Beginners