Drawing is not only a way to come up with pictures: drawing is a way to educate your eye to understand visual information, organizing it into a more hierarchical way, a more economical way. When you see something, if you draw often and frequently, you examine a room very differently. –Vik Muniz

Whether you are drawing a window with curtains, a still life with a tablecloth, or a clothed figure, you’ll have to deal with drapery at some point. 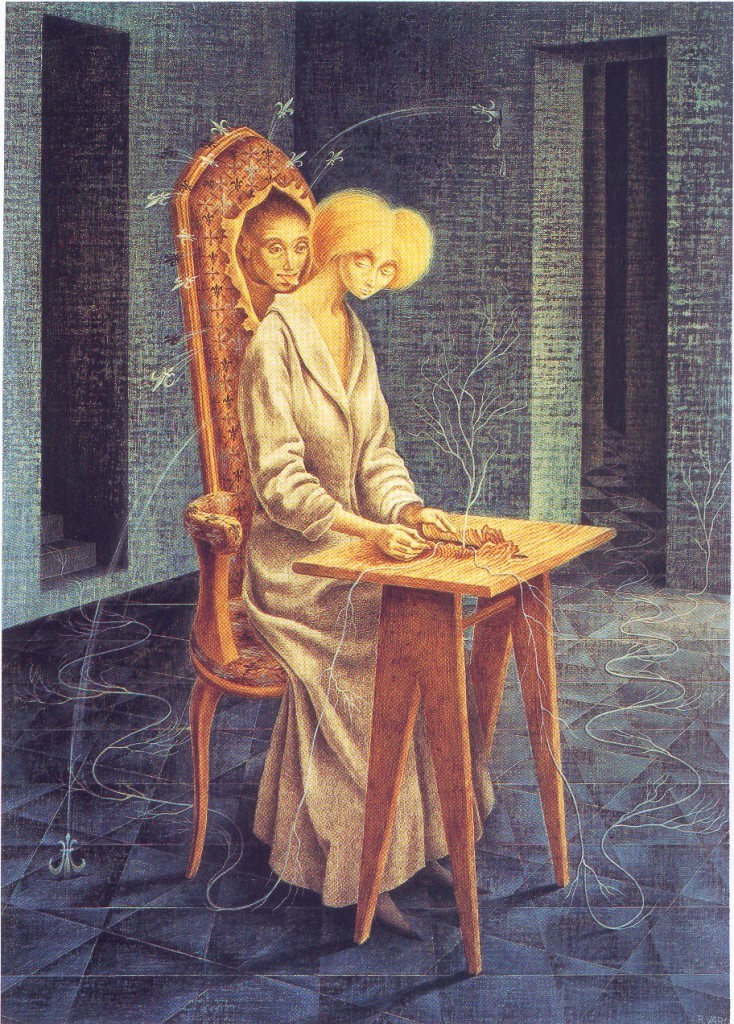 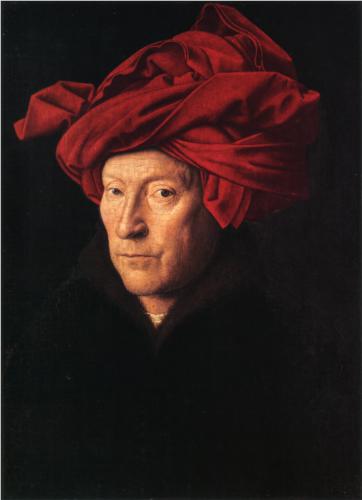 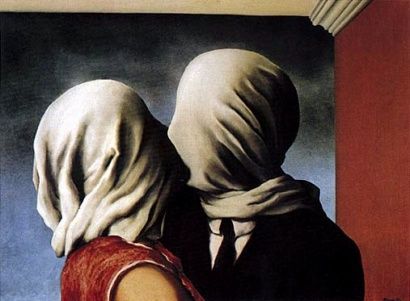 There are several different types of folds you will see when addressing drawing fabric:

In this lesson, I’ll define each of these folds and show you what they look like. You don’t have to memorize them, but it’s helpful to be able to identify them whether you’re drawing a still life with a tablecloth or a portrait of a person wearing a jacket.

This type of fold is commonly found in hanging curtains. 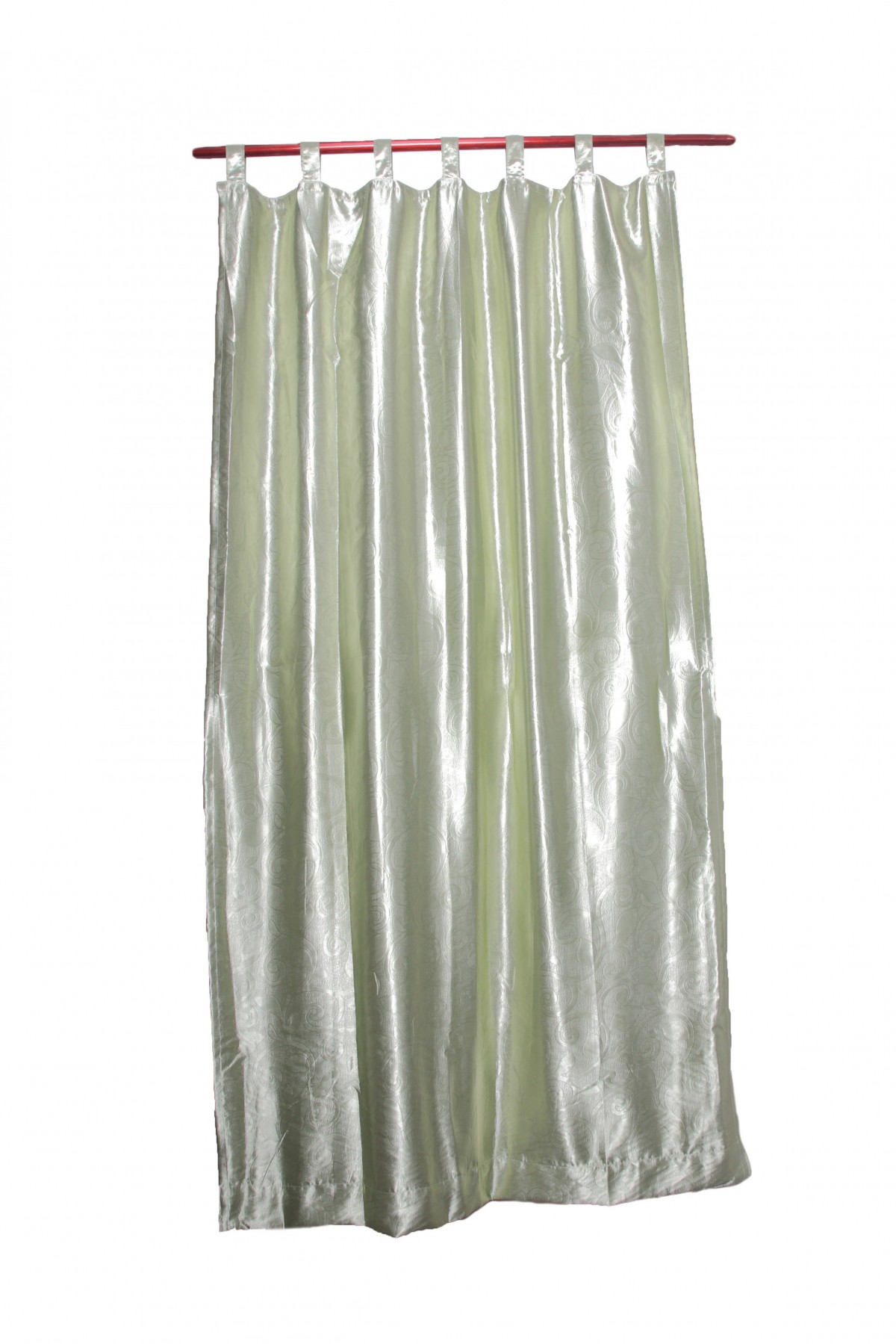 The folds themselves are usually conical or cylindrical in nature. It helps to identify these shapes before you start drawing them so you’re aware of the three-dimensionality of each fold. 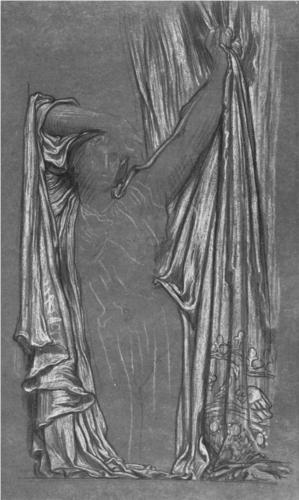 Frederic Leighton, Drapery Study* for The Last Watch of Hero, drawing on paper

* A study is typically a drawing or sketch done by artists to work something out before they make the finalized work of art. It helps the artist to identify any areas that may be problematic, both in terms of composition and rendering/execution. 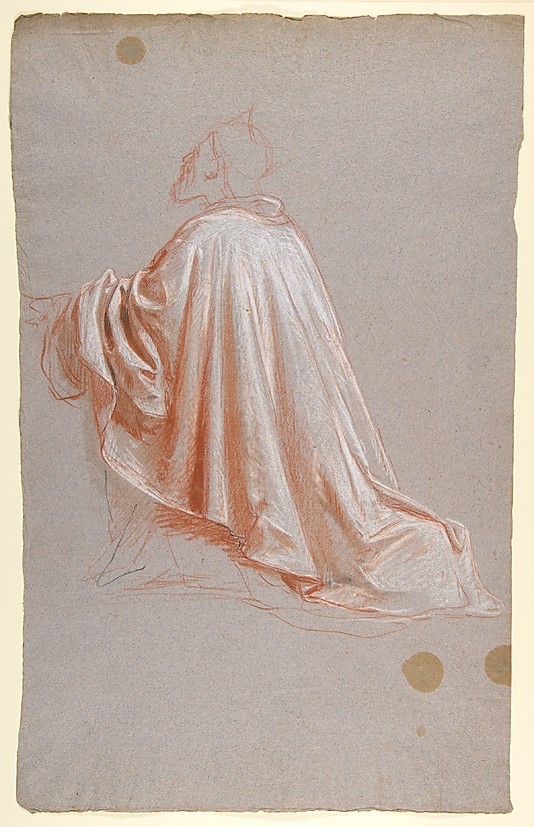 This fold can be seen in clothing a lot of the time. Think about a jacket when you bend your elbow, or the back of your jeans where your knees bend. Zigzag folds alternate directions. 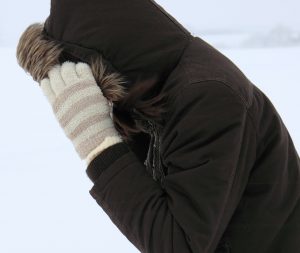 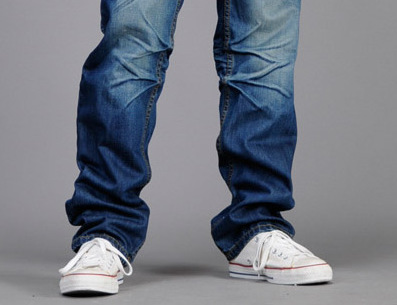 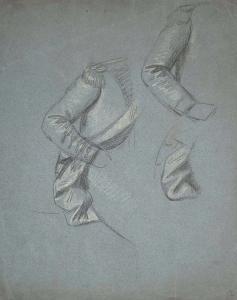 Spiral folds occur when fabric is wrapped around a cylindrical object. Think about the casing on a curtain where it’s wrapped around the curtain rod, or an arm inside a sleeve. The more fabric that is in the area, the more folds you will see. Softer fabrics will contain more rounded shapes, whereas stiffer fabrics will have more angular folds. 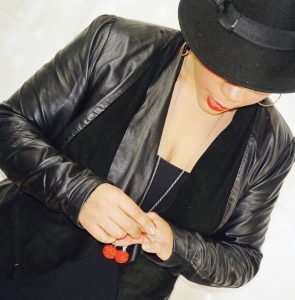 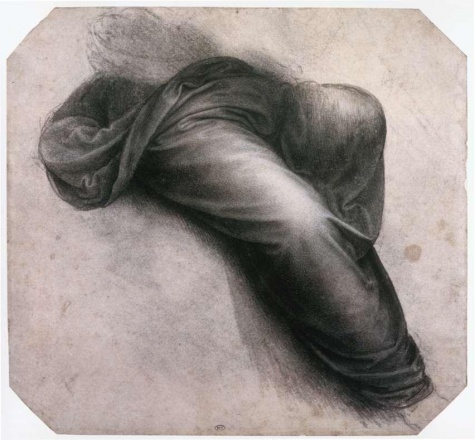 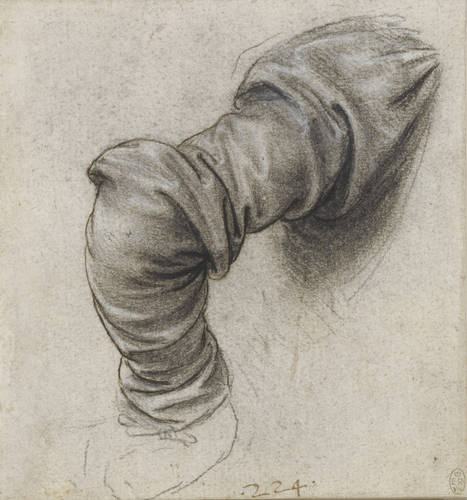 Half-lock folds happen when cylindrical pieces of fabric change directions suddenly, like the fold that happens at the back of your knee when you bend down. 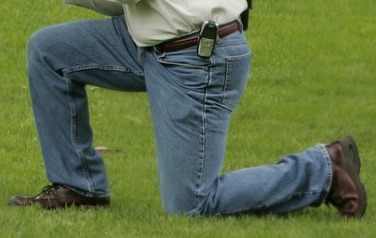 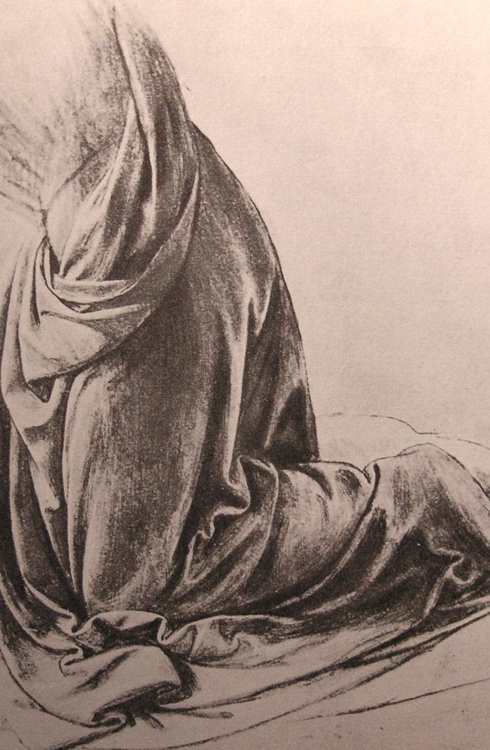 Looking around your home or studio, try to identify examples of the pipe, zigzag, spiral, and half-lock folds. You may need to look at yourself or other people to find the folds most common to clothing.

These folds appear when the fabric sags between two points of support. 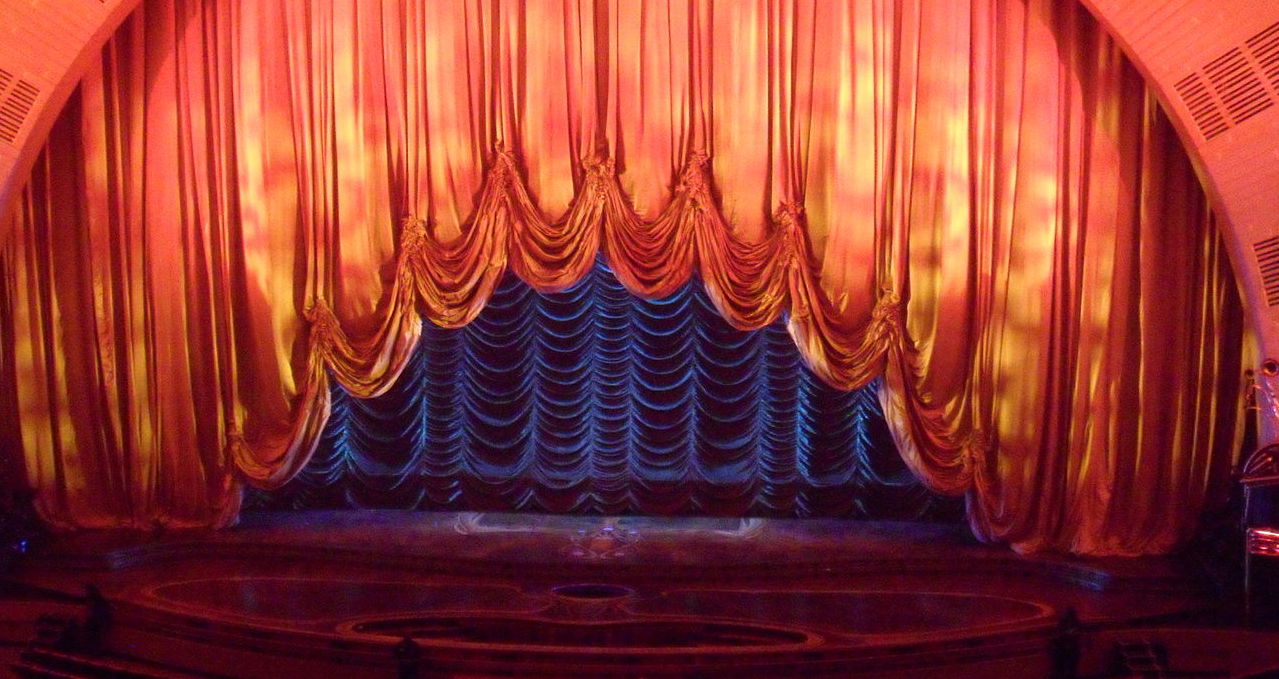 Albrecht Durer, Study of a Drapery, 1508, drawing on paper 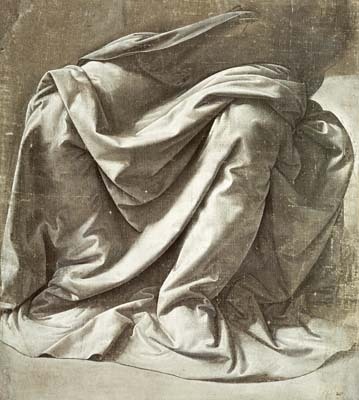 These folds are conical in shape and occur when fabric hangs from one single point of support. You can see it in the front of your pants when you bend at the knee. 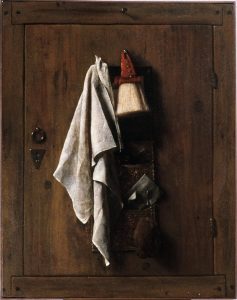 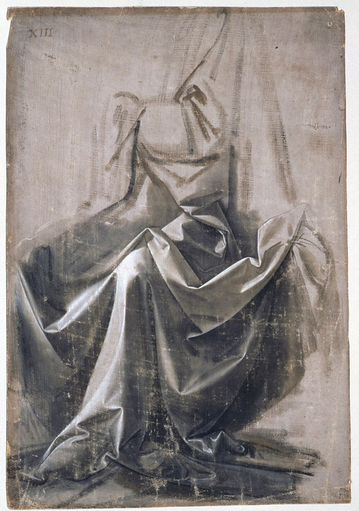 Inert folds are pretty much random folds. If you were to take a piece of fabric and drop in onto the ground, the resulting shapes are inert folds. These are always going to somewhat mimic the surface they’re on, so if you’ve dropped the fabric onto the flat floor, it will look different than if you drop it onto the arm of the couch, the dog, or the tea kettle. 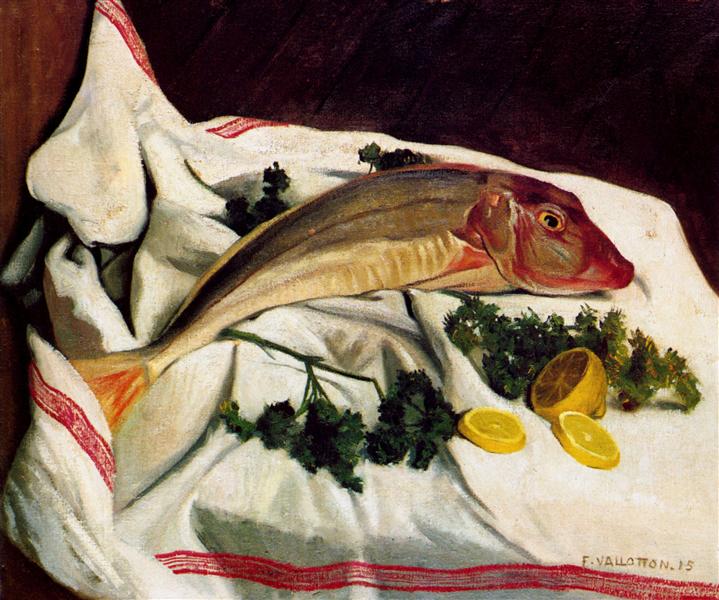 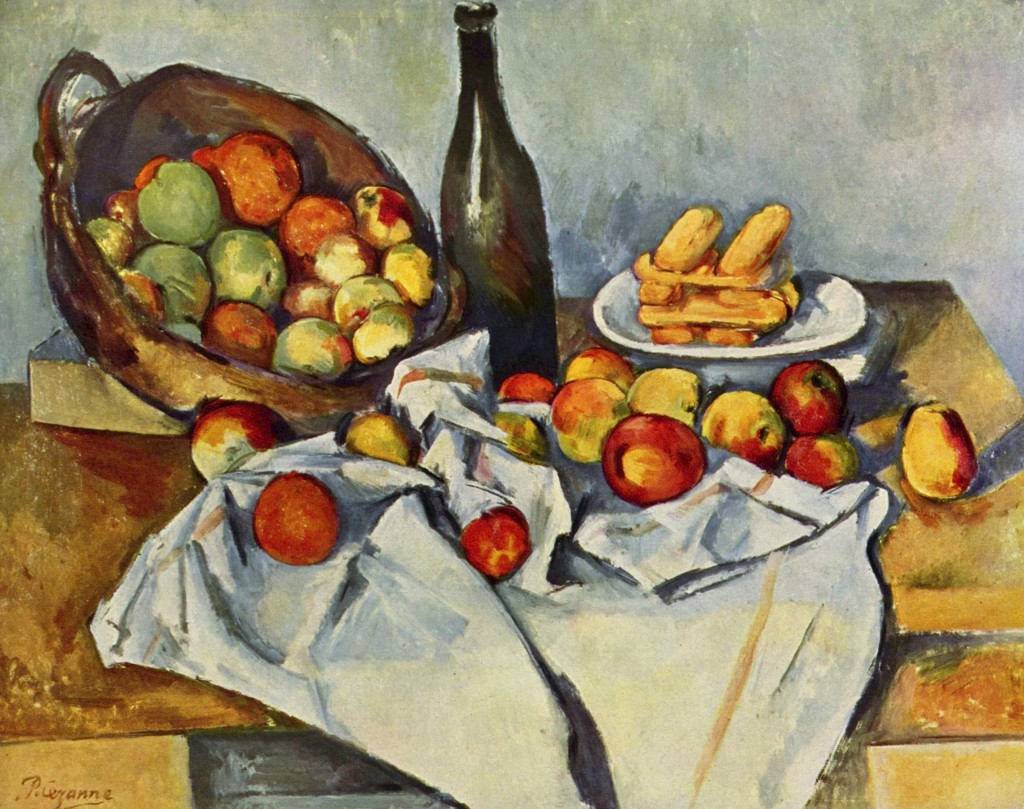 Okay, now that we can identify the different types of folds, start looking for them in your daily life. Try to identify the forms within the folds (cylinder, cone, cube). This will help you in modeling (or shading) the folds. Keep in mind the basic principles of adding value to your basic forms when working on drapery. The best thing to do when drawing drapery is to really look—spend time just looking at the shapes and shadows that are created in the drapery and draw what you see—not what you think you should see. In previous lessons, we’ve done drawings both by just trusting our eyes and being gestural with our pencils and measuring things out and drawing them geometrically. Ideally, you want to use a combination of both methods. Start off very loosely, making broad shapes and general lines, then once you have your drawing loosely laid in, go back in to it and start cleaning up with a more systematic, geometric approach.

Get a piece of a solid color fabric (a white dish towel, or sheet) and try to create the diaper fold, drop fold, and inert fold.

With your solid color fabric, create a diaper fold by pinning or taping two parts of the fabric to a wall. Use a desk lamp to light it from one side to create strong contrast between light and dark. Get our your pencil and paper and draw the fabric from observation. Draw the overall form of the fabric first, then add value after you are happy with your drawing.

If you’re interested in seeing how someone else draws drapery, try this time-lapse video by Zimou Tan showing how the artist is drawing a diaper fold: http://www.youtube.com/watch?v=aiSVD7fqEfc

Draw fabric wrapped around an object. 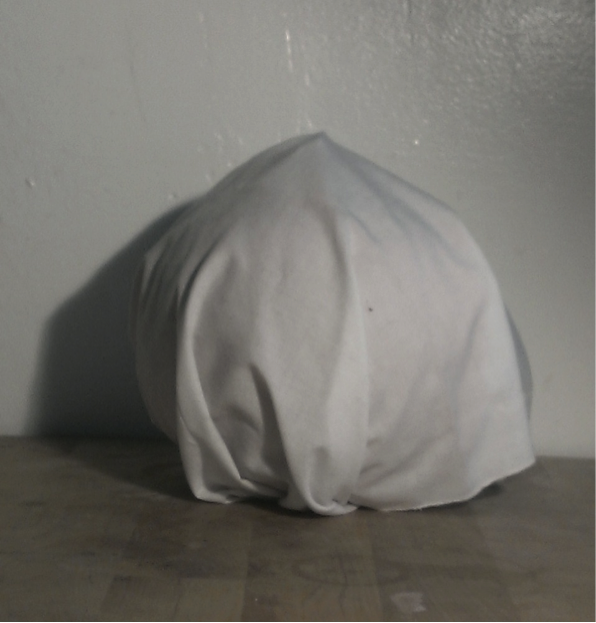 Try putting a teapot inside a pillowcase, or wrapping a pumpkin with a towel. Can you still see the form under the drapery? Try pinning the fabric or pulling it close to the object so the form is visible. Draw your wrapped object paying close attention to the different folds that occur, as they give clues to what lies beneath. 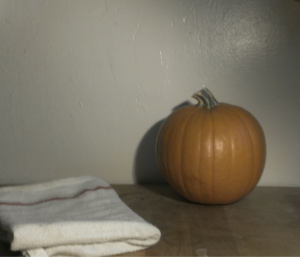 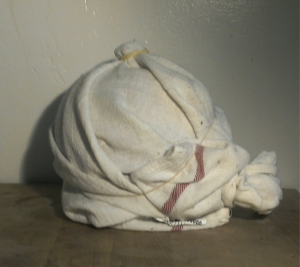 Show us your work! Send your completed drawings from the exercises in this lesson using our submission form.